Well, how was Florence, you ask?

And ate a pizza and pasta combo. Every. Single. Day.

Sadly, my husband did not suffer the same fate as I of becoming Reni’s rotund and squishy Cleopatra. Whilst I was growing a double chin to match those featured on the walls of the Pitti Palace, B more resembled a clammy Caravaggio cupid with a touch of food poisoning. 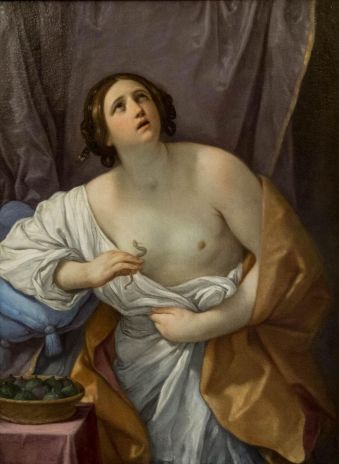 Guido Reni’s Cleopatra – ie my amorphous blobby carb self. Gonna need a bigger snake to do the deed!

What poisoned him, you wonder? Well, he blamed ‘the water’–you know, that famously foul Florentine water (of which I also indulged)–but I propose we go on a brief culinary journey to determine a more likely suspect. And then take a poll.

[It’s important to note that in between these featured meals, I ate a wide variety of margarita pizzas and caprese paninis and

and baguettes and balsamic as, unlike B, I require refueling every couple of hours to prevent rages.]

B: Asparagus and Prawn Risotto 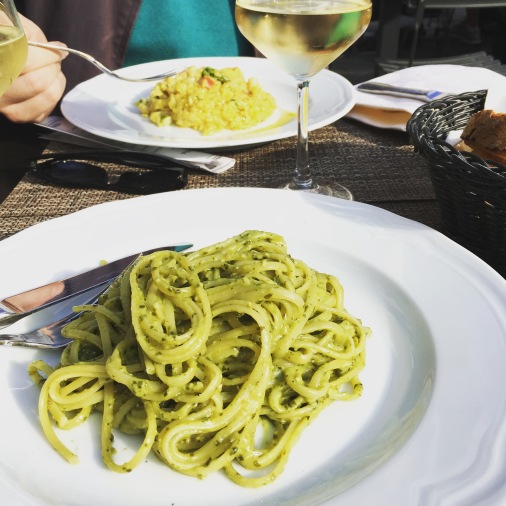 Innocuous enough? Look at the backdrop! We’re in Italy! Nothing can stop us! Yay!

Me: Some Cannelloni-esque Pasta Stuffed with Ricotta and Topped with Pesto and Pomegranate

B: Calamari Stuffed with Seafood in Black Squid Ink

I mean… this one is clearly the culprit, right?!

Look at his adoring face! Staring lovingly down at his demise! The tragedy of it!

Me: Spinach and Tomato Ravioli

Both: Caprese Salad and Red Wine 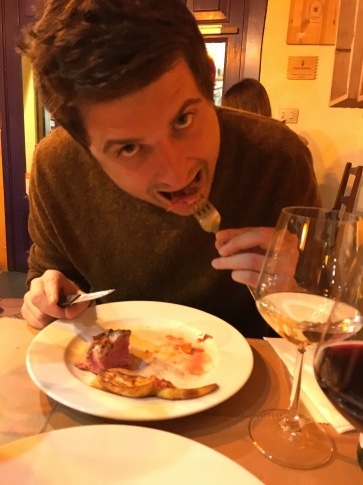 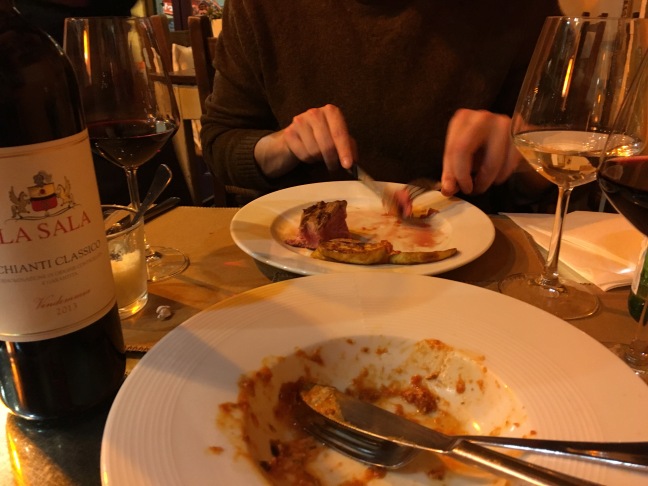 Look at that zeal! Is this the poor, dead beast who took its revenge? My food is not featured because I inhaled it before I could gather the strength to pick up my phone and take a picture.

B: Gnocchi with White Sauce and Chicory, poisonous water

Out of respect for the piqued, here’s a photo of the piazza we o’rlooked rather than of B’s pallid brow attempting to look well.

I’m sure you’re all thinking that I make super boring choices. Well, you know what? I MAINTAINED A SEMBLANCE OF WELLNESS.

Me: Spaghetti in Olive Oil with Red Chilli, Red Wine

B: [one hour later] Chicken and Vegetables, poisonous water 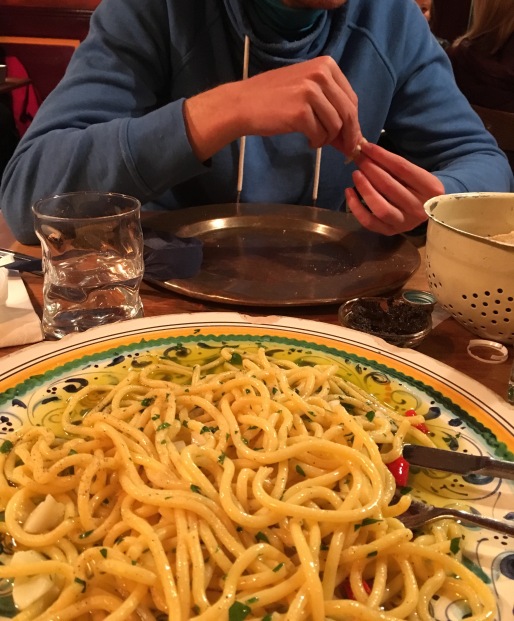 We had a bit of a staggered meal as we were both too scared to mention that we’d only received one of our entrees (will explain in a subsequent post re the Friendly Florentine). I panicked about having ordered the ‘large portion’ rather than the small (as I saw other tables eating the ‘large portion’ as family style and I suddenly felt like an enormous glutton) but, as I am a bottomless pit of pasta absorption, I ate all my spaghetti before B’s chicken even arrived. Weekes – family of one!

The Last Supper – B Finally Chooses Relatively Simplistic Fair – Well, We Chose the Same Meal, In Fact – I Astound B With the Veracity of My Hunger

‘You’ll never finish that!’ he said.

He looked up halfway through his own spaghetti and my plate was empty. B is usually able to wolf down three rounds of helpings during the time it takes me to finish one. Was it his weakened state that slowed him down or my insatiable Italian hunger that sped me up? Who can say. Whatever the reason, let the history books record that it happened.

Well, I clearly had a carby ol’ time of it, didn’t I? Poor, sweet, heroic B. He was such a trooper and barely acted ill…and I pay him back in blog posts.*

You gotta appreciate a good villain–especially one villainous enough to have an adjective named after him. This Weekes Word is inspired by the evil murderer Procrustes from Greek mythology who ‘made [his victims] lie on an iron bed and would force them to fit the bed by cutting off the parts that hung off the ends or by stretching those people who were too short’. Nice!

Procrustean: (adj) enforcing uniformity or conformity without regard to natural variation or individuality. Marked by arbitrary often ruthless disregard of individual differences or special circumstances. Ex: With a Procrustean zeal, B continued to indulge in Italian meats and sea life despite his bodily rejection of such evils.

*(If you enjoyed this post, check out more food misadventures here!)