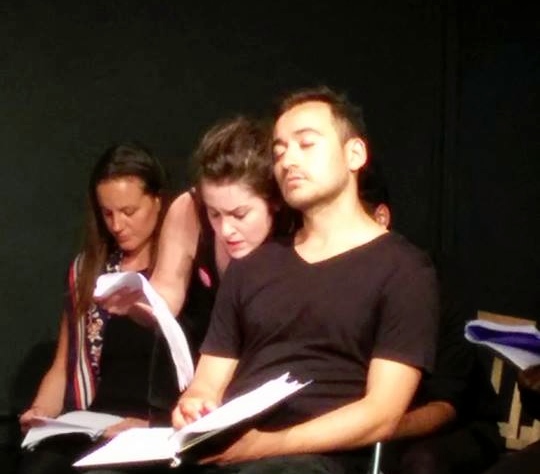 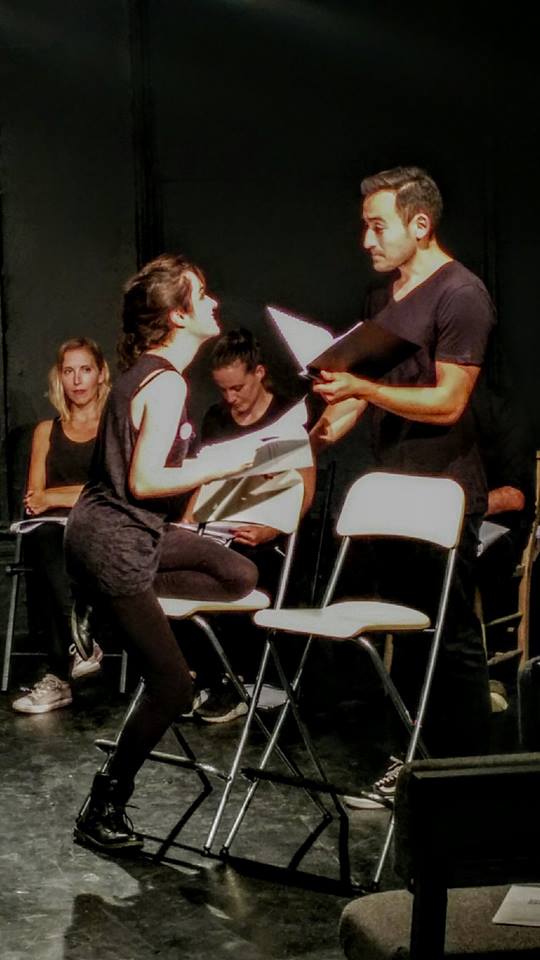 Seems like ages ago now, but I’d better get down some thoughts about my brief stint as a female Romeo in Lauren Morley’s new comedy Romiette & Julio.

It was rather a whirlwind process with rehearsals only spanning over 2 days, but luckily it was a reading, so we were permitted to use scripts and stumble a bit from scene to scene.

Romeo/Romiette has been rewritten as a Texan teen struggling between her love for Julio (son to Representative Capulet campaigning to tear down the wall between Mexico and the US) and her duty to the family business/her father (whose company, Montague Corp, has been contracted to build the wall). The premise works well. Lessons are learned and nobody dies so…comedy!

In the original play, Romeo’s gender grants him agency. While Juliet must remain cooped up at home, Romeo is permitted to be out in the wide world carousing with his buddies and, ostensibly, making arrangements for he and Juliet to be together. But despite Romeo’s gender privilege of freedom, Juliet is actually the pragmatic lover who schemes, organises, and makes shit happen. You get the feeling that Romeo would live out his days just mooning around if Juliet didn’t issue him concrete orders for ACTION. So, Shakespeare actually subverts traditional notions of gender in these characterisations (as in many of his other plays, of course).

Interesting, in the gender-swapped Romiette & Julio, Romiette retains Juliet’s sense of ‘masculine’ decisiveness and surety. It is Juliet who very quickly and suddenly turns to conversation to marriage in the original balcony scene; no question, Romeo, you will marry me tomorrow! In this playwright’s version, it is Romiette who suggests to Julio that they must marry to solve their woes. And then Romiette goes back out into the wide world and makes that happen.

So, of course, my favourite part about playing Romiette was her freedom. It was liberating to have a chance to be on the other side of Juliet’s isolation, loneliness, and independence. Romiette has her gang, friends–gets to laugh and joke with Mercutio and Ben and walk the streets of Verona as she pleases. I liked being with the boys. Unbridled, mercurial, melodramatic. And, as the playwright said of my performance, feisty.

Although I think my Juliet is pretty feisty too.

What’s next? Well, I’ve got a couple of auditions this week (I have to ‘tell a joke’ in one of them–I don’t know any jokes–do you think observational sarcastic commentary about an idiot people counts?) as well as yet another potentially crazzzzzzzzy day-job-work-crisis meltdown scenario in Poowich so… wish me luck! If I survive, I’ll be back to fill you in on all that, tell you about an exciting trip to Shakespeare’s Globe with Sinéad Beastie and Cordelia, and share another Shakespearean monologue.

Until then… adieu, gentle readers. Let’s go get ’em this week!